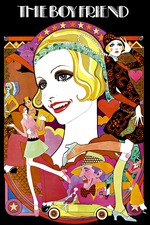 Ken is firing on all his maximalist cylinders here in a production that might feel more that it’s about to fly off the tracks than any of his other films I’ve seen, which is saying QUITE a lot. Throwing in everything but the kitchen sink here doesn’t really serve this one particularly well, as it’s such a flight of fancy - indulging every aspect of Russel’s 1920’s fetishism that he can muster - that there’s no opportunity to feel we’re on solid ground. Musical numbers followed by daydream sequences followed by flashes of exposition, it’s...a lot. I’d also maybe like this more if I had a deeper appreciation of the music and the era. As much as I love the garish set pieces and kaleidoscopic Busby Berkeley tributes, I found myself nodding off during the numbers (of which there are MANY). Also, the colloquial affectations of this period make me throw up in my mouth a little. When someone mimics melody with a “do-dee-o-do” or a girl pokes her butt out and says “poop-pe-doop”, part of my libido shrivels up and dies.