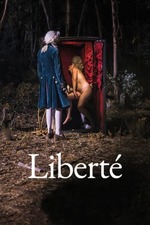 The abundance of Victorian kink gives plenty of room for Serra’s dry absurdism, but the predominantly nocturnal setting limits his ability to compose the painterly images I’ve come to love in his work.
If nothing else, it’s a fine showcase of the strangest looking cocks 18th century Europe had to offer.

From what I’ve seen of the photographs, I suspect this works much better in its original stage version - not to mention that it starred two of Germany’s finest actors, Helmut Berger and Ingrid Caven.