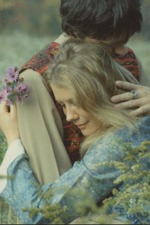 The first public screening of this film, more than 50 years after its production.

It probably should have stayed lost.

This seems like a failed production with lots of sound problems - what little dialogue there is sounds muffled and distant. The rest of the movie patches one insufferable music montage after another together into something that kinda sorta resembles a movie. And that soundtrack - WOOF.

There's a semi-interesting meta element that often turns the camera back onto the crew, allowing glimpses of the crusty old jabronis who've foolishly set out to depict the authentic hippie experience. Good luck, guys.

Approaching the end of the movie, I remembered that this was advertised as examining the dark side of the idyllic era, though nothing up to that point really fit that description.
Queue sudden and narratively un-motivated rape scene.