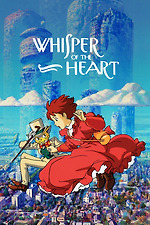 Earlier on Twitter, I asked why America could never produce an animated film like this, to which someone responded that a film of this quality is rare in Japan as well. That must be true, but it's a misapprehension of what I meant: even setting aside the film's quality, its very structure and purpose, a low-key character drama in which fantasy provides only the briefest appearance, is alien to our concept of animation as a vehicle for preoccupying children and, on occasion, providing a knowing wink to older crowds who take their kids. To be clear, though, this is very much a film for youth, foregrounding the awkward first steps of self-actualization taken by creative teenagers, the self-conscious awareness of their inexperience weighing down their brash confidence in seeking to create art before hitting high school, and the fear of being "found out" as a fraud blinding them to the much gentler learning curve they are allowed to adopt. Sometimes the more violent and obscene Japanese animated works are held aloft as demonstrations of how much more can be done with the format there, but for me a film like this, a film of youth that seeks to meet youth on their terms, is a far more elegant display of possibility.

Oh, but to go back and touch briefly on the film's quality, my God, what an exceptionally realized, minutely textured yet open film this is, with cartoon characters who feel more relevant, fleshed-out and just plain real than 99.9% of the live-action youth that have populated cinema screens. One of my favorite exchanges of the film explicitly keeps the drama from being stretched beyond its means, when Shizuku maintains that her slipping grades and focus on her writing are not a form of rebellion but a pursuit of a dream, which sounds lofty but directly nips a more fanciful kind of drama in the bud. The compositions are rendered more objectively than in, say, Miyazaki's projects, but that only enhances the feeling that what we are seeing is straightforward, unadorned honesty.

I admit the ending seems a bit of a regression, but the fact that the young couple's commitment to each other sounds very much like idealistic young love, as possible to hold true as it is likely they will soon grow into a more mature, less blinkered understanding of romance, suggests it's yet one more show of how well the film gets young people and does not judge them for their zeal even as it pushes them on paths to marry that drive with experience and reflection.