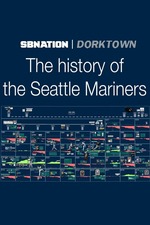 I never clicked with Moneyball when I saw it, not because I thought it was a poorly made film (if anything I was impressed that a boardroom, coach's office baseball movie was so propulsive) but because it made me realize, even as it broadly celebrated this fact, that baseball pioneered the phenomenon of the human being as algorithmic variable, of the millennia of philosophical debate over the nature of the self being completely overridden by a set of numbers that could somehow perfectly predict our behavior and outcomes, outcomes naturally to the profit of others. Moneyball sees Scott Hatteberg's walk-off homer as exhilarating proof that a gamble on math worked; I saw it as a psychologically merciless admission in the guise of an inspirational sports movie that there was no such thing as free will.

What is most remarkable about The History of the Seattle Mariners, and the Jon Bois project writ large, is that if anything he drills down even deeper into the idea of humans as collections of measurable data sets and statistics, using a bare minimum of actual sporting event footage to skirt rights clearances and instead relying on graphs of bars and dots to represent the highs and (especially in the case of the Mariners) absolute lows of individuals and teams. And through it all, he conveys better than just about any big-budget, star-studded sports film I can think of both the stranger-than-fiction narratives that sports offers fans and the way that no amount of hard data can account for the sheer chaos of the human element that can throw every kind of predictive analysis into pandemonium.

This is a gripping account of a team that Bois passionately argues represents the essence and greatness of baseball despite having no World Series wins and only a handful of mostly dismal playoff showings. A team whose first decade-plus of existence is so embarrassing that you start to wonder if the Mariners were a tax-avoidance scheme. A team that, in that thrilling middle stretch, inexplicably ended up with a handful of the greatest players the game has ever seen, and how despite that they still kept getting barred at the gates of the Promised Land.

It is impossible to articulate just how much emotional impact Bois wrings out of plotting out data using methods that look so Web 2.0 that I keep expecting the Newgrounds logo to pop up or for a stickman to enter from out of frame and start firing comically oversized, notebook-doodle bazookas and machine guns. He somehow builds the humans back out from the numbers, making that 1995 ALDS run that literally decided the team's future in Seattle exhilarating with no more than a minute's worth of actual footage from all five games. There's more footage of A-Rod giggling like a meathead on CNBC programs than playing baseball, yet Bois reclaims the hated Yankee as a truly inspiring young Mariner. And Randy Johnson, who looks like Jeff Foxworthy fell into a taffy pull and emerged two feet taller and fucking meaner than you can even comprehend, is the coolest motherfucker to ever do it based mainly on one blown-up photo of him throwing a pitch so intensely you think the ball is going into the Death Star's exhaust chute. And even for someone like me who never cared about baseball, it's a reminder of how and why Ken Griffey Jr. was everywhere in the '90s and why you just liked the guy even if you knew shit fucking all about the game.

Bitch and moan about Jon Bois being on Letterboxd if you've truly got nothing better to do with your time, but if you don't see stuff like this as aesthetically and structurally advancing nonfiction cinema, whatever.