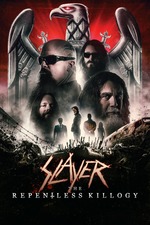 Not convinced anyone enjoyed the introduction to what everyone expected to just be 'a Slayer gig on the big screen'. A horrific gorefest loosely tying together the band's videos from the Repentless album cycle, it kind of appeals to an old-school metalhead mindset, of blood and guts imagery and not much else. It's fun in an inane music video on Youtube kind of way, but not when you kinda just wanna get to what you came for.

Been to well over 200 gigs at this point in my life, but Slayer haven't been one of them. Always been in awe of what they do, but find their pacing a little too consistent - it's breakneck in a way that's awesome for ten minutes, but tedious for much longer.

A cinema screen with hot chocolate in hand might've been the least metal way to give their live show a shot. Less rowdy than Metallica's S&M2 screening - which had folk coming and going every song to replenish beers - everyone was very cordial for a band not known for subtlety.

The rapidfire approach to getting through a set worked well, since they never give you much time to catch your breath. They fire through something close to 20 songs in what feels like the blink of an eye.

What I appreciated most was their on-stage attitude. A lot of young bands think presence means running around, over the top stomping, synchronised jumps. Tom Araya barely moves, but he's this imposing figure, totally in control. I'm not sure any band makes their instruments feel as powerful as Slayer do. Kerry King, with his tattoos and chains, looks like heavy metal.

It's that visual impact, much more than the flames and the provocative iconography, that makes Slayer such a dominant force. They come across like a force of nature as individuals, self-assured and capable of causing a storm. I'm gutted I'll never see them live, but I'm glad this exists as the next best thing.