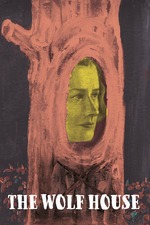 This is a difficult film to rate especially when many of the references ended up going right over my head. The Wolf House is the story of Colonia Dignidad told through a fairy tale/nightmare about a girl who takes up residence in an abandoned house while running from a wolf.

Colonia Dignidad was a compound in Chile that for decades housed a cult led by Paul Schafer, a German who fled his country to escape charges of pedophilia. The colony was the site of a range of atrocities that included child sexual abuse, the torture and disappearing of political prisoners, and the physical and mental abuse of its members. The place also had ties to Nazi war criminals and the rise of Pinochet.

Without knowing any of the backstory, The Wolf House would make little to no sense. My understanding of Chilean history in general is lacking so some of the nuance is still lost on me. However, the feelings of isolation and control, and the specter of fear and abuse (sexual and otherwise) come through whether you have a full grasp on the historical context or not. There are also several symbols of the colony woven throughout the film (the traditional German peasant garb that members were required to wear, the honey that the colony was famous for exporting).

The animation is fantastic and is an impressive combination of stop motion and painting which blend and move between and across 3-D objects including walls and furniture. The constant breaking down, building up, dissolution, and transformation of the characters and the house itself gets exhausting after a while although this is not necessarily a bad or unintentional side effect.

This style of animation owes something to the brothers Quay especially in the grime and the unsettling motions of the characters. Still, it's ultimately its own thing and it is impressive seeing it spread across a feature instead of an experimental short.

I can't say that this was an especially enjoyable watching experience. I spent much of the film in some combination of uncomfortable, confused, and impressed. However, it is one of the more original releases of 2018 at the very least.