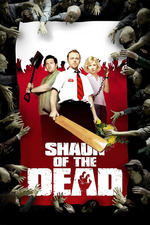 Who died and made you fucking king of the zombies?

Shaun of the Dead is a genuine, "let's sit back with a bag of crisps and a coke" film. Everything about it screams mundane Britain, from its queues of oblivious, brain dead customers at the check outs, to its over dependency on the pub as a place for decision making and socialising. The joke is that the average 9-5 job is enough to make anyone numb to their surroundings. If a zombie apocalypse were to suddenly occur, how long would it take you to realise? It takes Shaun and Edd approximately one night and one day, and about half an hour of the film goes by before they've properly twigged.

Top notch humour, and a bunch of lovable characters played with brilliant energy, is what sets this apart from other attempts at horror comedy. Our two slobs (Simon Pegg and Nick Frost) are joined by a supporting cast that includes Kate Ashfield, Lucy Davis, Dylan Moran, Peter Serafinowicz, Penelope Wilton and Bill Nighy. In the face of imminent death, an odd alliance is formed between people who don't particularly like each other, and who don't have much to offer in terms of strength or brains. This is what makes their efforts so amusing as they each grapple with cricket bats, spades, swingball posts, and jukeboxes in attempts to survive. Each zombie killing is delightfully wacky, messy, and unplanned. Watching Edd and Shaun ponder over which vinyl records to throw as Frisbees at the necks of two approaching undeads is a moment of pure genius; and the Don't Stop me Now scene may be overplayed, but is still as classic now as it was back in 2004.

Friendship and goodwill are as much a part of this film as the blood and laughs, and it's that extra bit of depth at moments where it seems like the film's main priority is satire, that raise it above your average parody. The final scene is a brilliant testimony to comradeship, and it's also strangely comforting to see people on the sofa talking about tea and a pub lunch after the whole thing has finally "blown over" as predicted, despite the film being a comment on the boring lives we Brits lead. After all, who can deny the blissful satisfaction of a good brew?

On our way to the corner shop after watching this film, myself and my flat mate were discussing how long it would take us to realise we were in the midst of an apocalypse. I guessed about a day, considering that the town where we live is pretty quiet, and the guys behind the counter don't really talk much anyway. She agreed, and we then went on to make a detailed plan as to which items in the house would make the best weapons. As you can probably tell, I lead about as thrilling a life as Shaun and his friends.