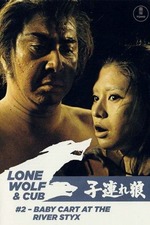 Lone Wolf and Cub: Baby Cart at the…

I thought the first was a perfect Samurai movie, right up until I finished baby cart at the river stix. It has EVERYTHING that made the original great, except the gore and kills are at an all time high. The baby cart is STRAPPED this time around and little dude is more than ready to murder alongside his father.

Just to mention a few kills, the cart with swords shooting out of the wheels? The fucking metal bear claw that was used to PULL A DUDE OUT OF THE SAND??? Cmon man. I don't even wanna start the next few movies because I can't imagine anything topping this.

This is also the second movie in a row that ends with lone wolf and cub telling a chick that's interested in him to walk the other way and leave him be.