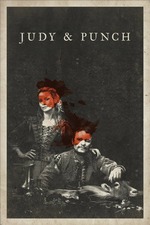 Despite origins in 16th century Italy and containing a character named Pulcinella, the concept of the traditional puppet show Punch & Judy would eventually make its home in Britain during the 17th century – historians say 1662, thanks to a diary entry by the Bridget Jones of his day, Samuel Pepys.

Within a hundred years ‘Pulcinella’ was anglicised to the much snappier and succinct ‘Mr. Punch’ and Joan, his wife also had a name change and took on the moniker ‘Judy’. Puppets on strings would pull a Pinocchio, only rather than becoming ‘real’ they would adorn the hands of the hidden human and entertain adults and children alike for more than 350 years - regardless of form or plot-line - usually at the seaside. Perhaps it was the sea air which rendered audiences immune to the repugnancy of the insidious Mr. Punch.

‘Seaside’ is the locale of Mirrah Foulkes’ debut feature, ‘somewhere in England’ and ‘nowhere near the sea’. A small cloaked figure steals into town to sneak into the evening's show. Bottler Judy (Mia Wasikowska) shakes a tankard for coinage and entertains the crowd before announcing the main event: Professor Punch (Damon Herriman) and his puppets. He appears through crimson velvet drapery with a bang and cloud of smoke; caked in face-paint, jester-like in his stage costume complete with twirled moustache. Make no mistake, this – debatable when we see Judy’s puppeteering skills – is the star of the show. By the end of the elaborate opening credits we, just like the rowdy audience onscreen, are hooked.

Punch and Judy live in a beautiful home with their daughter, Baby (the cheek pinchingly adorable Scarlett and Summer Dixon), maid Maud (Brenda Palmer) and her husband Scaramouche (Tony Norris). They await the day that scouts arrive in Seaside to discover the magic of their talent and transplant it to The Big Smoke. He wants more fame and fortune – swanning around Seaside as a minor celeb is not quite enough for his ego - while she seems fairly content with their lot. Although, she does seek to tone down the ‘punchy and smashy’ aspect of the show, while imploring him to stop frequenting local watering hole McDrinkie's, and ideally would like the community around her to be a little less… judgemental.