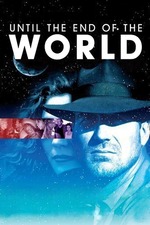 PROBABLY THE BEST HANGOVER FILM EVER, SINCE YOU START WITH CLAIRE HUNGOVER, GO ON LONG-ASS ADVENTURES ALL OVER THE WORLD, AND NONE OF IT REALLY MAKES SENSE...

The longest, loosest, funkiest, messiest road movie ever, by a film maker who cares more about getting the soul right and the landscapes shot than giving the actors lines that sound in any way believable.

It's clearly his love letter to Solveig Dommartin, giving her more picturesque and lovely locations than most actresses get in a career. And hats. That bitch got so many new wacky ass hats in this movie, that I think she has 'em dehydrated in vitamin pill size and rehydraates them.

For some film makers, the important ending isn't to kill the dragon or get the treasure at the end of the adventure film, but just to bring all the people together at the end--like Paris, Texas, where it's just about getting the little boy back to his mom, or in any number of Wes Anderson films, where the goal is just to get the whole family group together again one last time. This film is like that.

I saw this in the original shorter version in 91 when it was required viewing for cinephiles because we all loved Paris Texas and Wings of Desire, Bill Hurt, and this thing had the coolest bands in the world on it--Talking Heads, Peter Gabriel, REM, Elvis Costello and Lou Reed: that alone made it a film we HAD to see. That it really didn't quite make sense didn't matter.

But this is one of the few films--Dances with Wolves is another--that actually seems shorter though it's twice as long: the shagginess of the story and its wandering is so much more a part of the soul caught in this film that we need it.

To those of us old enough to've lived through 1999--when Y2K was supposed to wipe clean all computers on Earth: I got an extra week off teaching HS drama that year and wrote and recorded many songs--there was actual peril that year, and this film--I had it on VHS--synched up.

It was also visionary in many ways as well--featuring the first HD video ever on film, hand held personal monitor phones like we didn't get for years, small laptop computers, and computer search engines that could find anybody.

Sam Neill gets the worst part I've ever seen for him--clearly playing the heartbroken Wim Wenders role: he's barely ever believable in any scene, and the detective with him says the dumbest things in any film.

But when Wim can get Max Von Sydow and Jeanne Moreau to come to Australia for a Sci Fi film--which only begins halfway into a 5-hour movie--you gotta respect that.