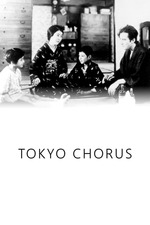 CHAPLIN, KEATON, AND LLOYD IN TOKYO: Japanese Gag Master with a Heart.

Nothing in the world is so satisfying as a well-crafted gag film like this one--and clearly, Ozu was imitating his silent comic sensei in Lloyd and Keaton--both of whom had mostly ended their film careers--and touches of Chaplin in the sentimentality and the stiff Chaplinesque Mickey Mouse walk of the protagonist.

The first episode is a Keaton/Lloyd short, loaded with beautiful gags that are so visually simple yet complete that he needs no title cards: we sympathize with the little Japanese Keaton/Chaplin who has no shirt but wants to please and fit in with his school mates, yet we laugh with empathy that he doesn't quite.

OZU Rule #2: The relationship between kids and parents is rich with comedy, gags, and pathos. Use it.

The second act expands on the basic Keaton short by advancing our protag to the role of a working father with two kids.

OZU RULE #3: If you can apply a physical gag to turn an ordinary scene into something quirky and unique, do so. Like the kid coming in to ask mom about getting a bicycle and putting one foot on the dinner dish or whatever that pot is, then trying to clean it off when mom disapproves.

Ozu here uses kid actors just as well as Lloyd did as comic foils to grown ups, like in the brilliant gag of the son dropping 78 records on the floor, drawing Dad's ire, then the dad drops and breaks two records, earning him a smirk from the son. Unlike Chaplin who used kids in films like this as tear-jerky props, Ozu's kids are lively gag machines that scratch their bums in little shorts.

OZU RULE #4: If you have title cards, make them artful and stylish as well. They're part of the film.