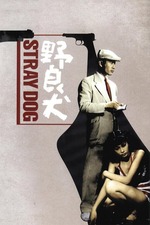 KUROSAWA MIFUNE SHIMURA: What Else Need I Say?

Toshiro Mifune has found his stride as a brilliant international star able to carry a film, Takashi Shimura shines again deeply but quietly as the experienced Mentor to him who runs half as fast but gets further, and in their young ingenue they found a brat equal to Lauren Bacall or the other chicks Bogart lights cigarettes for.

This Japan is rattled, corrupt, discouraged, having been beaten in war and occupied--by my Dad in fact, only two years after this film. And in true noir fashion, we get a wonderful tour of the underworld of Tokyo in 1949 and how sweaty and rainy it is.

Don't get me wrong. I love Sam Spade and Phillip Marlowe. Grew up on 'em. But I love young Toshiro Mifune here before he becomes all knowing and arrogant, and is still trim, shaven, and making mistakes. At this point, he's irresisistible.