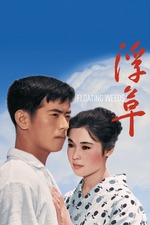 I'm doing what you probably shouldn't do: watching both "Floating Weeds" films the same day.

I LOVED the first, though I honestly couldn't care less about the Father/estranged Son plot: the father was the weakest character compared to his theatrical love interest and little Tomio, the boy clown who plays the dog. No one else can compare to the two of them for charm, humanity, and subtlety as actors. I didn't miss the lack of color or dialogue.

OZU might be the worst director for dialogue, because he really doesn't need it, and far too often, what's said is either said or countermanded by some actions that are far more effective.

The Planometric framing works brilliantly and shows how a space can be explored in interesting ways. The color is gorgeous. The addition of sound in scenes like the rain is gorgeous.

But the addition of dialogue, to me, barely does anything for the film, compared to having actual sight gags and action in the 34 film.

And no matter how stiff the Master was in 34, this old geezer is SKEEZY--bellyaching about his son. The son is a stiff, the Mom is too young to be his mom, and his theatre main squeeze isn't diabolical or compelling.

And there's no dog clown.

A thoroughly worse film except for moments of theatre and putting on makeup. Even the "Seduce him" scene, which raised high stakes with a ten Yen note pinned to her makeup mirror was hot. But this was thick with late 50s morality. The seduction is cute, but the boy is a stiff.

I can understand why an artist would want to return and remake a previous work. But in almost all areas except color and sound, this film is a step down from the original.