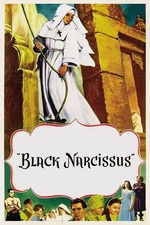 NO ONE CAN RESIST MR. SHORT SHORTS!

This is one of the most sensual films ever made, or at least sensual in a British way. Oddly, the most bare person most of the time is the caretaker rake.

Even though this whole miracle of a film was created in a studio, and those matte paintings are layers of glass photographed together to make the mountains and valleys float, we feel the organic pull of the colors the same way we feel the organic warmth of an LP recording compared to the clinical sterility of a digital sampling.