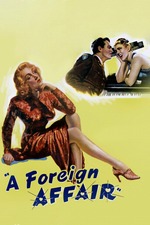 Two weeks later, I return to my Dietrich festival's last film, this edgy Billy Wilder comedy, that's a clear example of how he drew on Preston Sturges' clever farcical pieces from this same time.

In some ways, it's a documentary, showing Berlin after the Blitz as well as the very buildings Hitler used and committed suicide in. After having watched films like Fritz Lang's "M" exploring the anxiety of rising fascism, this farce is a relief: seeing that the only problem a congresswoman from Iowa has is that Our Boys are staying morally proper is adorable: I can see Billy Wilder winking at Iowa and its delicious corn from here.

It has been a kick to see Marlene move from a chunky Weimar cabaret chanteuse we could barely hear to this classic Hollywood film where not only do we get crystal clear sound and crisp editing, but special camera effects like rear-projection tours of Berlin and our ingenues watching Goebbels on film.

And Wilder's edginess is here--the satirical farce mask slips to be just a bit bitter and sneers; Jean Arthur's Congresswoman is mocked early on here like Ninotchka and shown as a prude whose stiff moral values are silly.

That doesn't mean that Wilder doesn't spin gold from this German straw: scenes like the soldier stalking her down a row of filing cabinets as she defends herself with a series of top drawers and he eventually traps her in a corner of top drawers is a gag worthy of Buster Keaton--though it would be a consent free bit of sexual assault today.

And this is barely a Dietrich film, though it's nice to see her again--especially in her beloved Berlin.