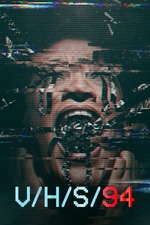 I love me an anthology, and VHS 2 in particular has always stood as an example of it being done quite well. The returning talents from that outing to this, along with some newcomers that I've enjoyed material from, made me pretty excited for this (I've just had to shelve it for a little bit to get through the rest of this month's watch list).

Anyway, while it seems like these movies get mentioned often enough in a positive light, it always surprises me to see the reviews aren't that great. I get that the anthology format means a variety of styles and tones that create a sort of up and down experience, but I found all of these stories to be very entertaining, much like I did with VHS 2. They're funny, gruesome, creepy, and put neat spins on some classic monster concepts, which is always a plus for me too. It'll be easier to talk about just breaking them down one by one though.

Holy Hell, the wrap around that weaves between the stories, is the weakest segment easily for me. Which is not remotely surprising, the wraparounds have been the weakest parts of this whole franchise in my eyes, so it's practically tradition. That said, the first few snippets of it are fun, moody setting with some creepy imagery, it's mostly just in the conclusion where it over explains itself in the most mundane and uninteresting way possible that it falls over. Being that this part is the last thing that you see is a bummer in that regard, but it's still fine, nothing offensive enough to be noteworthy. 6/10

Storm Drain is the first interjected short, written and directed by newcomer Chloe Okuno, and it's a delightful opening segment. The local news/vintage aesthetic is well executed, and the dialogue and visual gags of the opening interviews are hilarious. From there it becomes a creepy, wacked out creature feature with splashes of gooey, gushy gore. Hail Raatma is immediately iconic as far as I'm concerned. 8/10

The Empty Wake rolls in second, brought to us by "series" regular and veteran writer Simon Barrett, hot off of directing the recent and charming mystery slasher Seance. Here he opts for far more atmosphere and suspense, through prolonged isolation in an eerie, stormy backdrop. I thought the little background scares in this were well executed, and the buildup had my attention. The climax rolls in with another great "creature" design, and a pretty tightly paced showdown. The way the storm grows, and the warning sirens pour in as it builds up adds a cataclysmic sense of dread to something that is otherwise incredibly small scale and contained, which is an impressive feat. This is the most serious of the whole lot for sure, which might make it stick out, but I like that variety, and I think he nails it. 8/10

The Subject was probably my most anticipated of the shorts, and from what I've read, is a favorite for those who liked this series enough to have one. Timo Tjahjanto, one half of the team behind the standout short Safe Haven from VHS 2 returns to bring out another outrageous, outlandish splatter fest. Despite making the absurdity of its scenario clear right out the gate, it surprisingly takes its time building up, making sure there's still a level of humanity in the mix. When it finally pops off, it's a mashup of the likes of Frankenstein's Army, The Raid, and Hardcore Henry that's hard not to get gleeful about. My main issues here are that the camera quality is dramatically sleeker than the other features, the on screen HUD being about all that really makes it pass for VHS found footage, and this fact is compounded with the amount of CGI used for...well a lot of stuff. So that video quality made the effects a little more obvious to me, leading to a few uncanny moments that I think would've looked better by looking worse haha. So, bizarrely enough, if I were pressed to rank this I would probably put this nearer the bottom, though it'd splitting hairs for sure because it's as entertaining as any of the core segments. 8/10

Terror closes the film out as far as standalone segments go, brought to us by Ryan Prows, whose 2017 debut Lowlife was an instant favorite of mine. I didn't realize he was among the lineup for this, and finding out mid movie got me excited, and that excitement was paid off. Taking on some political drama from a small, extremist religious angle is one of those things that is going to stir up some people, whether it rubs them the wrong way, or they see it as being too on the nose given the climate of the last...several years. I thought it was handled well, and was even one of the only moments in the lineup that addresses the world of 1994 outside of the aesthetic medium.

The militia cast are great, both concerning threats, like their real world parallels, and hilariously clownish, like their real world parallels. The supernatural angle is supremely intriguing as information about it is filtered in, and once its nature is reveal, I was ecstatic to see a fresh and bizarre take on the entity and what could be done with it. Especially interesting considering we had another great piece of media play with the same creature in a different small, hyper religious community recently. The climax is a riot of action and laughs, and the creature design rocks. Seems to be an against the grain take, but this just edged out the others as my favorite segment. 9/10

Overall, I was having fun pretty much nonstop with this. The final moments of the wraparound are a bit of an eyeroll, but whatever, it doesn't take itself that seriously and there's no real need to. As for everything else, I'm looking forward to watching every bit of it again, and my anticipation for new works from the new talents involved has only grown. Hail Raatma!