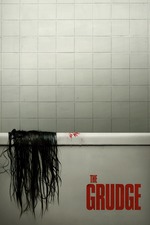 And so we begin 2020 with the first Horror release to theaters. Given that it's a second remake (though I guess it's more of a "requel"), and a January release, it was hard to get my hopes up too high for this one. However, I'd been intrigued by Nicolas Pesce's attachment as director and writer. At this point I haven't felt strongly about either of his previous feature films, but I recognized in both of them a certain level of craftsmanship and style that screams "potential". And ultimately I walked away from the The Grudge with the exact same feeling.

I can already see this film getting ripped apart; it was already drawing a lot of ire just for being what it is. And really it sadly lacks in originality and development on the ideas of the original films to earn points with those already positioned against it, or in the eyes of a mainstream audience that are less focused on the details than I try to be. I do think that it makes good on the multi-layered narrative style seen in the original film, piecing together several tragic tales with thin, but endearing enough characters. But it still manages to recycle scares and scenes that were already recycled in the last remake, which is tough to defend.

So I come back to that "potential", which lies in predominately in the technical merits. It's very nicely shot; particularly in capturing the settings. Lingering takes of homes, mundane, but unsettling. It's gutsy enough to go for daylight scares, even from the start, and there are plenty of quality background scares that I enjoyed; shadows, faces, figures lingering in dead space. Unfortunately there are several jump scares that are comically exaggerated and lacking any real bite; so much so that they almost feel like they belong in a completely different film. These, along with a few moments in the narrative where time seems lost, and characters displaced, have made me wonder if the film was undermined in the editing process. I've got not basis to claim any studio meddling, but it wouldn't surprise me to hear in light of how disjointed some of these elements are.

Otherwise though, it's quite ably performed, with only a few supporting cast members coming off a bit stiff. I particularly liked Betty Gilpin, who had some of the more expressively demanding moments. It hits some decent emotional beats, even if the destined doom of the characters means you can't get too invested, and there are even a few moments of dark humor that I found quite enjoyable; though again I have to wonder if there was more to that at some point, considering how they stick out from much of the rest of the film. I also enjoyed the score quite a bit, provided by genre regulars The Newton Brothers. It's a quiet presence, but one I remained aware of, that eventually jumped out with a very aggressive, vocalized cut in the film's climax.

In the end, I left feeling lightly positive about the film, though not quite enough to call it good. It's not going to be terribly memorable, nor is it likely worth going out of your way for, but it's fine. Reviews heralding this as completely awful are a bit silly to me, but it seems like everything has to be the best or the worst these days. I think this falls a lot more in the middle, and I still hold out some hope that Pesce will find the right project one day.