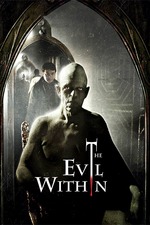 Just reading about the making of The Evil Within was enough to make me very interested in seeing it. Writer and director Andrew Getty spent over a decade working on the film, years after filming had ended, spending a substantial portion of his personal fortune in the process. A man obsessed, he took on the bulk of the work himself, crafting practical effects and editing every scene in pursuit of perfection. Unfortunately, he would pass away during the process, leaving the film to idle for another couple years before finally finding distribution.

What does such a film look like? A film of unbridled passion and ambition, crafted with the very life blood of its maker. I can tell you that it is something quite unlike anything I've ever seen. I won't pretend this is a masterpiece, or a slice of film perfection; it has flaws and deficiencies not unlike what you might expect from a production of its size, budget, and creator's experience. It also has originality and creativity in spades.

I can't even quite describe the effects in this film, beyond to state that they are "dream-like". A perfect compliment in light of the subject matter, I'd say. The camera and mirror tricks, coupled with stop motion and meticulous set design create for some really...cool fucking scenes. Prettying up the description doesn't really do it justice, they just look awesome and made me question how it was done (what's more, how it was come up with) at every turn. Of course a few of the animatronics and prosthetics are a little cheesy looking, but it's a fault I can see past for appreciation of the love that went into their production.

The plot and perspective is so intriguing and engaging as well, and despite a few rough bits of dialogue and contrived coincidences, the cast manages to keep it together, sounding substantially more natural than I'd expect dialogue to sound in a film like this. I honestly went in prepared for The Room level dialogue and was made a fool of. Frederick Koehler is especially fantastic, having to juggle various incarnations of himself throughout the film, often within the same scene. The challenge of acting out a handicapped role is no easy feat either, but like the character he passionately makes his case that there is much more to him than that. Sure, these are no award winning performances, but they have passion and they compel the narrative forward.

I've said it before already, but passion really is what makes this feature. Such dedication and vision to create something new and worthwhile. The loss of Mr. Getty is a tragedy. I think with time and experience, he could've honed his vision of original and surreal horror into a true masterpiece. Without him, I suppose we'll have just have to make due with our dreams.

You can find this review here, as well as my other reviews at HorrorReviewed.