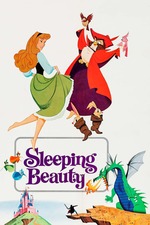 Sleeping Beauty unspools with gentle sweetness and a dollop of lurking gloom. Placing characters who look like paper cutouts from newspaper cartoons and setting them against backdrops that look akin to expensive wallpaper patterns creates a moving medieval tapestry. It all comes out nicely in a crisply stylized fairyland, where the colors are rich, the sounds are luscious and magic sparkles spurt charmingly from wands.

Eye-popping colors ooze through the screen, with the bright pinks and blues of the fairies’ dresses providing a terrific contrast to the wicked purples and greens of Maleficent’s castle. Just as the film’s gorgeous backdrops suggest characters trapped in suspended animation, the many colorful balls of light that frequently circle their heads hauntingly convey the filmmakers’ idea of fate and love locked in a cosmic struggle.

Technical wizardry aside, it's the supporting characters that elevate this above other Disney classics. Flora, Fauna and Merryweather (perfect names for fairies) surprisingly have more screen time than the protagonist herself, bustling and bickering like your favorite grandma, as they swear off wand-waving in order to protect Princess Aurora from the evil curse, but realize how hard that promise is to keep.

On the other side of the spectrum, there’s Maleficent, who is THE disney villian of villains. She's creepy, mysterious, prolific, frightening, and even beautiful. With eyes of a demon and a cackle of a witch, she commands the screen. Flames ripple across the cuts in her sleeves, bat wings loom from her collar, and spiraling horns complete her outfit sinisterly. The raven that hovers aloft her and the wooden staff she carries gives us the impression that this is the most malice creature ever to step into this world.

Overflowing with flights of visual fancy, plucking of harps in the background, and celestial metaphors, Sleeping Beauty proves to be a simple, yet endlessly elegant addition to the Disney canon that will forever remain in my heart.