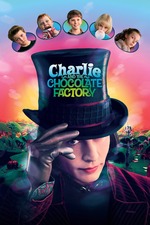 this is so CURSED and RANDOM in all the best ways. I may be biased, because almost every image of this has been ingrained into my brain since i was young, BUT STILL.

First off, the time period is perfectly all over the place: women dress like they’re in some 1950s “I Love Lucy” type satire, kids play modern ultra violent video games, blue collar workers are losing their jobs to machines, and Oompa Loompas sing Beach Boys-esque songs.

And everything is SO over the top and dramatic. The Buckets only eat a watered-down bowl of cabbage and their two pairs of grandparents live in one bed. The parents giving Charlie a small chocolate bar is presented with suspense and utmost glee of finding out somebody’s pregnant. Oh, and they live in a shack that leans in random directions and Charlie literally sleeps in a shoebox that’s open to weather.

The look of it feels drunk off of Tim Burton’s own style. The chocolate factory itself looks plucked fresh from a Pink Floyd album cover and every frame shimmers with an eerie gloss of CGI airbrushing. All the whatsits and thingamabobs have a double-edged look, but also a Dr. Seuss-ish swirlieness. Every image is like looking through candy glass or a translucent lollipop, there’s something slightly off about it… and i mean that in the highest of compliments, of course.

All the characters have a CGI glow to them, particularly the 4 other contestants, as if they got dipped in The Polar Express and were pulled out into a live action world. They have such exaggerated facial features, whether its Augustus Gloop’s balloon cheeks or Veruca Salt’s horse teeth. The most outlandish of them all though? Johnny Depp.

He plays Willy Wonka with the voice of Michael Jackson and the flamboyant gestures of Austin Powers. He looks and acts like a 19th-century vampire that works as a backup dancer at Twenty-One Pilots or Panic At the Disco concerts. Also, he’s seriously evil, like a cheery ringleader that’s trying to hide a dark circus in his mind as he fantasizes about cannibalism and dances as people swell up into blueberries and get viciously attacked by squirrels.

I have no idea how or why this movie was made, but I do know that it is amazing in its own weird little world.