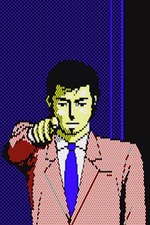 my relationship with this is weird, because my very emotional response mirrors my relationship that I actually have with the home I've built over the years online. my place here has been rooted in safe, self-inflicted alienation that stems from a fear to commit to extremity, or a fear to explore. it's news to no one that I'm the black sheep of my family, I am different from everyone in it, and growing up has been a hazy and ambiguous journey of letting myself loose and finding myself not through sharp moments of euphoria or finding some deep belonging in a secluded space (not until much later at least) but through a slow, steady uncovering of what was always there. I wasn't ever active on 4chan because I didn't want to be a person that was active on 4chan, but I went there and I knew what was going on. Matt and Myles taught me that much. I wasn't active on tumblr because I didn't want to be a person that was active on tumblr, but I knew what was going on. My curiosity about and confusing belonging to the weird, obviously queer kids in middle school and high school made me interested in figuring that out as well, but I didn't wanna commit because that meant I would be something I wasn't ready to be. When I got active on reddit in 2015 and found discord as a result a year or so later, only then did I really commit, and at that point I was playing catchup with people that already had these experiences, were there for all the infamous greentexts, had grown up scouring SCP and nestling into the cradles and folds of the burgeoning internet. My experience really has been retrospective, realizing that I somehow made it here by storing away all of the extremity that I exposed myself to but quickly detached myself from, until I bought in, and at that point I was behind everybody and my naivety blazed through. I am always playing catchup on my interests, realizing that many of my friends found solace and respite and belonging in much of the media that I am just now discovering. Maybe that was a good thing, because it led to building some of the most genuine and wonderful friendships that I have ever had. But, it layers on top of the feelings of separation that I have every day. It is very disorienting and disillusioning to take a look at yourself and realize that it will take some work to figure out what built you because you never commit to anything or because you never let yourself / were allowed to be exposed to it or to identify with it. Whether that was my fault or not is a fool's errand to try and determine; the fact of the matter is that I'm here now, and I'm conscious and capable and I made it through and I see myself in sharper tones. It's all more in focus. Maybe it took me a while because of my environment, maybe it took me a while to shake all that off and realize I am exactly who I am, and what built me is not my identity entirely but an aspect of me. I've got what I care about, what I know I love, what I know I belong to, and that is the important part. It is confusing and claustrophobia-inducing to think about the benefits to my mental health that could've come from really diving deep into the internet for myself a bit earlier, but I have a tendency to what-if myself into oblivion, and it's always extremely upsetting and extremely unproductive. I've gotta give myself credit, too; I was on Minecraft in the alpha phase, I was on f7u12 at its height, the first pornography I saw was on /x/ when I was 11. I've had a home in discord for 4 years and was browsing many outlandish corners of reddit for longer. none of this is necessarily flex material, but I don't need to wish I grew up sooner. I was ready when I needed to be, and I am where I am, and I wouldn't have it any different. It's just strange to realize that the internet has always been mine, even though I've though I've always felt like I'm missing out on it.

anyway, all of this that I just wrote is what this film DOESN'T understand. it's beautiful to look at, but at its core this is some serious outside looking in shit. don't hate what you don't understand.