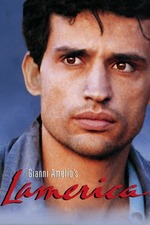 Set soon after the collapse of communism in Albania, Lamerica finds writer and director Gianni Amelio revealing a tremendous amount of compassion to the ambitions and desires of migrants.

Evolving against the background of large numbers of Albanians fleeing to Italy, it follows two Italians entering Albania to defraud the venture capital extended by the Italian government to those willing to create a business in the southeastern European country.

Part of the Italian government's legislation is that an Albanian citizen is to manage any developing business. Consequently, needing little more than a signature for their proposed phoney company, Gino Cutrari (Enrico Lo Verso), the youngest of the two Sicilians, appoints a confused former political prisoner named Spiro to fill the token role. Spiro soon eludes his would-be associates, and the young Sicilian becomes compelled to pursue him throughout the Albanian countryside.

The engaging narrative never relinquishes itself to sentimentality as Gino sets out on the mission, which ultimately leads him to uncover Spiro's tragic personal history together with coming to be oriented with the enormous breadth of Albanian poverty.

There's plenty of desperate portrayals of underprivileged men and women who are endeavouring to embark on the exploration for a better existence after decades under a dictatorship and the detrimental impact of other countries on their society. It additionally calls attention to the overcrowded and barely seaworthy ships used in making the voyage to a potentially less brutal and harsh coastline for a generation of immigrants. Lamerica is a poignant and harrowing political drama.

The Cabin in the Woods