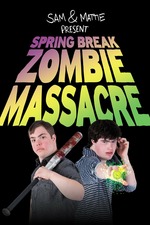 Two friends with down syndrome funded a film via Kickstarter to make their dreams of making a movie that they would enjoy come true. That's all you need. If you know fully aware of how this movie came into existence and you have audacity to hate it, then fuck you.

It's a terribly made movie. But so what. These two guys are having a blast. It's silly and funny and just plain ridiculous. It has good anti-bullying messages and has these two guys are living their dream. Haven't you always wanted to have super powers? Well these guys made a movie that gave them superpowers. This is one of those films, it's only 40 minutes long so it's more of a short than a feature film, that is just so much fun that you let go of pretensions and fall in with it. I won't pretend that watching the film with its creators Sam and Mattie two rows in front of me loving every minute of it and shouting out their favorite lines in time with the film didn't impact my feelings. It was a unique experience but one that I see folk watching this at home getting to share just because the film oozes that kind of joy. I am super jealous of these two. They wanted to make a movie and they did. They made it fun and funny and in such a way that narrative logic has no place. I want to believe that Sam and Mattie fever will take over America.