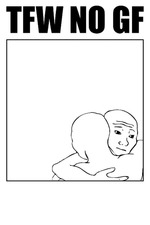 cld have been more sociological but it's nice enough for what it is, just an attempt to connect w/ these guys (EDIT: + one transfem) who have relatively little going for them in their lives. didn't go deep enough or anything, and i was slightly disappointed in that it didn't explore the subculture in more detail, but hey

i dunno. as for the sociological aspect it's rly good at portraying "another face of the world". the intended thesis is kinda hazy, smth abt "what incel culture rly is and means", the most blatant thesis at the end is "these are just some guys, everyone deserves a bit of compassion", the actual, far more subtle thesis that comes out is "absolutely nothing is working for anybody if you're not at the top and it's left a lot of people at the fucking breaking point and shit gets ugly from there"

(i wanna point out that like, there's whole forums for femcels, trancels, gaycels, incels of colour, etc., and one of the most prominent "ha ha only serious" injokes in the broader 4chan-derived subculture is "maybe i should just go gay/transition instead". so attempting to reduce this particular manifestation of a broader issue as a whole to "boo-hoo white male tears" is (1) absurd and more importantly (2) not helping)

basically what a lot of ppl in this film and elsewhere seem to be expressing is, much more than simply pain at not having a gf, a feeling of total isolation, a lack of control over and access to one's most basic needs in life, and an awareness of their own mental illness and/or neurodivergence. on top of that, given that they're mostly male, hegemonic masculinity makes it nearly impossible for them to simply discuss these feelings and problems openly; they feel it's their burden to bear, and alone. furthermore, a lot of ppl who profess to oppose hegemonic masculinity just end up reinforcing it much of the time—"men should talk about their feelings more. but only up to a certain point and within strict boundaries. past that they're gross and a burden"

it's also the effect of being lied to. one of the things about patriarchal norms is that they're an immense lie. the essence of patriarchy isn't merely domination of men over women, but domination of Man and Woman—an idealised image—over real men and women. it says to men, "you deserve women, you deserve power, you deserve success", but the real terms and conditions are hidden in a huge block of fine print. the only point at which a real man can be a Real Man is when he controls capital and military might, and as such real living breathing men are pitted against each other. and when you take those lies, and combine them with lies commonly told to children, and told by people to themselves—as Charls said, "a lot of people just think their future is predefined at a super early age, even when it's not, so they make terrible decisions like, just failing all your classes, never going to school and everything, and you just kinda have to live w/ those the rest of your life"—the dissonance between that and reality is enough to break you. and when you're told—or often just feel like you're being told—that you don't deserve compassion, that you don't deserve a break on top of that, it becomes dangerous

(i'm rambling lol) basically, my point is that there's a couple of guys in the movie i don't particularly care for much but Viddy is one of the sweetest people alive and their brother is rly nice too and if you say anything bad about them i will fucking cut you. feeling a light 7 on this one

EDIT: oh wow i thought i edited this months ago. just changing pronouns for Viddy, the rest remains unedited