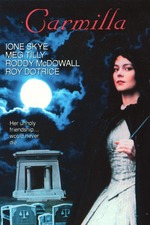 i was wrong, emily harris wasn't the first woman to adapt carmilla, gabrielle beaumont was. i wish i could say this was a pleasant surprise but i still definitely prefer harris' version, flaws and all. will i ever get a faithful adaptation though? haha, i'll keep dreaming.

that lovely shot of laura and the dollhouse... nice sharp objects reference.

anyway, the change from styria to the american south isn't too bad but it is wasted, not a single new or compelling commentary about it there. the few black characters in the story are not a big part of the narrative.

as for our leading ladies, well, i suppose the movie tries to follow the novel in basic plot but puts its own spin, so i can't say the novel is translated at all. while meg tilly does what she can with the character, i feel carmilla is missing the sense of menace, her relationship with laura is rushed and not in a good way. while it started promising, there's no progression. the homoerotic undertones from the novel are nonexistent and that's like my favorite part, this was made in 1989, but like a review pointed out, it could very well be from the 50s...

poor roddy mcdowall, he couldn't save the day.

y'know, i could keep complaining but i take it for what it is, as far as adaptations go, at least it's not male gazey, i recognize i'm settling for less yet the gothic atmosphere was on point, i'll take at least that.