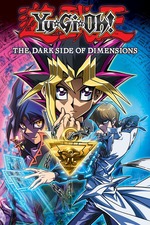 Y'know how many Studio Ghibli films I've seen? Two. An animation studio rammed with classic releases and I've only ever sat down and watched two of them. I've got a lot sitting in the cupboard, unwatched. I'm not bragging about this - I just want you to know that when I disregard such quality in favour of watching Yu-Gi-Oh! - I'm not proud of myself.

I don't think I was prepared for how obtuse Yu-Gi-Oh was. I knew it revolved around some kind of card game but I expected it to be like the Pokémon TV show. More about the story and magic beasts than two people actually playing cards against each other - but no, that's exactly what happens. A lot. A ton in fact.

Folks square off, drawing cards that summon demons and monsters - who fight like fuck for alittle bit. The best part is the schoolyard-like refusal to admit defeat. No matter what someone draws, there is always a counter, always a trap. Our hero has thought seventeen steps ahead and disposes with fools with a well-practiced smirk. It's infuriating.

It's also very confusing and I wouldn't be surprised if it was all made up on the spot.

"Ah ha! Your Angel of Death is no match for my...my fuckin'...ICE DRAGON CRYSTAL BREAKER EX" - that kind of thing.

However it's all delivered with such a dry lack of humour that I started to cosy up to it. Yu-Gi-Oh has the brass neck to take itself quite seriously - and coupled with some reasonably decent monster designs, fun animations during attacks and of course some hot EGYPTIAN SHIT I was keen to watch more.

Well, I searched Now TV for more - and there wasn't any so I gave up.