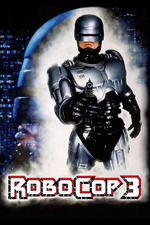 This is definitely fine. I mean, it's fine y'know?
The first RoboCop was a wild, violent masterpiece wrapped up as satire, with the sequel aiming fairly low in that regard. The third film forgets all about satire and just flat out tells us how bad big business is for the working classes and homeless.

Despite this brash approach it's a much safer film, that you'd probably be fine to show a group of bored pre-teens. Probably. Maybe.

There's a much wackier, chummier tone at times and I think that's due attempting to mirror the friendlier tone of the TV show.

I'm not saying the film is better for it but it's clear they had a job to do and I think they managed it. Plus there's jetpacks and that.