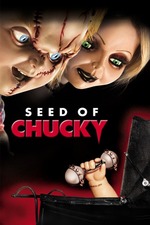 Rewatched this with the Don Mancini and Jennifer Tilly commentary track.

Mancini reveals that in between BRIDE and SEED, when they had initially passed on his idea for what ended up being this movie, his other pitch was an idea called CHUCKY GOES PSYCHO (which is the name of the fake Chucky movie-within-a-movie here) and in that one, Tiffany gets run over and killed by a bunch of kids partying (in a nod to I KNOW WHAT YOU DID LAST SUMMER) and Chucky goes crazy and kills them all one by one. And it all takes place at the Bates Motel. That sounds wonderful!

I knew this was the least expensive CHUCKY movie yet but I didn’t know to what extent - the movie had a $12 million budget but shot it in Romania as part of a European UK sale lease back deal, which means that everybody besides the principals had to be from the UK and 65% of that budget was spent in the UK doing post etc. That got them a $2 million tax rebate, so it really cost $10 million!

Kevin Yagher was busy working on the Lemony Snicket movie so couldn’t return.

Don Mancini pursued Pino Donaggio for the score, his favorite composer and repeated De Palma collaborator, and was thrilled to get him.

This movie is really great, love that it’s the goriest of them all and every kill is really pretty heinous. Including Chucky’s!