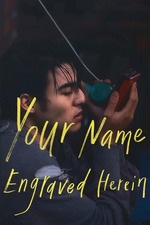 Your Name Engraved Herein was a film that took me completely by surprise having only just debuted. Set in 1987, as martial law ends in Taiwan, Jia-han (Edward Chen) and Birdy (Jing-Hua Tseng) fall in love amid family pressure, homophobia and social stigma and soon find themselves battling with their feelings.

"I'd rather go to hell now. Don't all homosexuals deserve to go to hell? Maybe more people would understand me in hell. Make it easy for me and help me go to hell."

This has to go down as one of the best foreign films this year. The sombre, bleak and rather depressing tone that inhabits Your Name Engraved Herein is a testament to how LGBT relationships during the 80's would have been. In a oppressive era, not everyone was allowed to express or stand up for their own love and thus the characters in this film act exactly how you'd expect them to. They fight with, hurt and love each other but are also scared of their feelings without fully understanding why. For me, this created not only a storyline that grew increasingly intriguing, despite being somewhat repetitive, but also two characters I was genuinely drawn in by with both Edward Chen and Jing-Hua Tseng giving two incredible performances that gripped me throughout.

Within the closing moments, the last shot symbolises the regrets, memories and just pure joy of being young the two shared compared to their older counterparts. It's no epic love story, but with some great directing, two fantastic performances and a story that was loosely based on the directors own experiences, the film feels profoundly powerful and for me, proved to be a great, yet somewhat depressing, watch.
2020 Releases Ranked