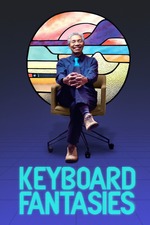 It’s so lovely to get insight into these back-shelved artists that have had resurgences in the past decade. I’d place Glenn Copeland in the company of fellow experimental folksters like Norma Tanega and Linda Perhacs for whom glory did not come in youth, but he has such a singular and magnetic presence.

I’m genuinely awestruck by his heart and levity. Speaking on both joyous + tough times while dismissing nothing. Discussing alienation, finding oneself, feeling strange/out of time, the kismet of forming your own family and living life for yourself, all with the same vigour and grace.

Also, it is awesome to see people of different generations treat each other like peers. The mutuality—holding hands, dancing, learning from each other, and supporting each other. It all warmed my heart incredibly, but I held up fine until his epiphany.

Glenn Copeland speaks of being greeted by a slew of fans at a show one of which thanked him for his kindness because, until then, they’d only known people to call the young selfish. I burst into tears and felt sort of ridiculous until I realized that he was crying too.

From description alone, you can feel the weight of that moment. A moment in which he realizes what he has been doing: telling young people that they are wonderful and capable of even more wonderful things. And from then on heeding the call + committing to carry on with that message. Making great sacrifices—switching one third act (retirement) for another—all to bring light to the future. I cried the whole rest of the time.

This doc isn’t really about the finer details, which would’ve been hard at this runtime, more like transmitting a feeling. As he says at the start, he is a radio through which the art that is nature transmits its frequencies. I am so thankful to have received them.

It’s full of such sweetness that it might seem a bit precious because sometimes kindness is hard to receive. Maybe it’s not your time now, but there is always something on the way. Invest in what you love, in yourself, in other people. Cultivate an environment of creativity and respect + eventually you may find that you truly belong somewhere. “It isn’t easy, but it’s possible.”

What a beautiful person like honestly wow...but I suppose the point of this was to reinforce that we are all capable of being this kind of person (warm, funny, effervescent, learned, and loving) for each other and ourselves.

Fit right into my heart. So grateful to share this earth with such wonderful people!!!!!!