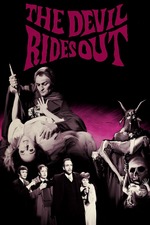 Other than the usual Hammer horror aptitude for gothic visuals and cheap-but-great effects (that lightning!), this film has several great things going for it:

1. There's a moment early on where someone gets punched to the ground, and the camera inexplicably and unexpectedly shakes. I don't think it happens again, and it's so delightfully shocking that it makes it seem like that punch broke the world.

2. The sequence with the circle of protection is just plain tense. It pulls out all the stops, with cheezy effects used well, simple tricks (a knock at the door) used well, and ultimately, some misdirection that makes the Angel of Death an intimidating presence on the screen. The ultimate reveal could be seen as silly, but the film is rooted in Christopher Lee's presence as protector. His utterly serious take helps make it palatable, and thus, the conflict is entirely about him.

3. The car chase sequence is brief but fun. It shows how careful these guys were about some things; you see each car splash the puddle to know where they are. It's the little things.

4. Despite being, of course, a Christian plot (as any devil worshiper story tends to end up being), it takes time to include a skeptic and have him not be a clown. It doesn't really address his belief at the end, but I assume the appearance of a giant spider and the Angel of Death convinced him. There's a cap on things with a nod to the Divine, but it's not overbearing. Mostly, it feels like a nod to the censors and a bit of contrasting flavor to make our devils more devilish.

5. At first, it looks like they're going to hit us with "it was all a dream," but they veer away in a manner that works by not invalidating everything we've been through. That's all I ask.

It's very sad to me that there was never a sequel for this the way Lee wanted.