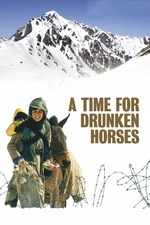 A Time for Drunken Horses 2000

The central, relentless metaphor of this film, driven home by its title, is that life is a brutal struggle. It requires support of some sort to get through, and little is to be found for the children at the center of this film. This film defies so much. It's not a crime story, though it is about smugglers. It is not a children's story, though it is about children. It is not a condemnation, though it portrays humanity at its worst. Instead, it contrasts the worst of humanity with determination of someone who by all rights should be a carefree spirit, in a perfect world. Instead, it reveals the dark truth of survival for the children. Instead, it suggests the smugglers are merely human, trying to survive.

It is not a disaster film, because the disaster it depicts is nothing sudden, but rather, simply a way of life. Instead, it is a film of survival, but it lacks the tropes of tension or nature's wrath. The snow is simply a fact, much as the deprivation, the manipulation, the predation that the children suffer. This film is about every compromise, trick, and desperate move that must be made to survive on the margins (in this case, a literal one as much as anything else).

There are multiple scenes where the small, disabled child is given injections in this film. These scenes are painful on multiple levels, but the most is that it's all for a minimal respite from grief and death. It's unclear what is wrong, only that whatever it is, it is fatal. We are told that it will kill him even if he gets the surgery he needs, and yet, and yet, the lead character, the too young man who is left in charge of this family, he keeps going, keeps seeking a way to earn enough, to bring his brother through the tribulations to not salvation, but merely an extension. Just enough for just a little bit more.