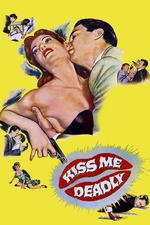 KMD has one of the most interesting, compelling, depictions of nuclear tech ever. It strips out all the usual impressed technological, like, sexiness that nukes typically come presented with, boiling it all down to pure, horrifying object - myth made real, and all the conventions of noir dropping away in the face of what humanity’s just done - the collapser of genre as much as the destroyer of worlds.

The pandora, lot’s wife scene is one of those little bits that sticks with me. So much of humanity’s collective mythos read like warnings of a technology that, in historical terms, was only around the corner but which they had no idea was actually coming.

It’s an interesting film. It reminds me of that quote about sufficiently developed science being indistinguishable from magic - how’s radiation any different from a literal curse. Weirdly heavy stuff.