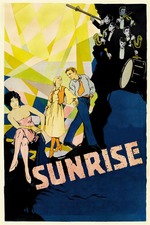 There is mesmerizing camerawork performed here, and incredible special effects shots - my favorite is probably where the happily reunited couple walks blissfully through traffic, just missing every car as if by magic. But that just wasn’t enough to get me into the story or characters. This should’ve been right up my alley, but I think this is my third time seeing it and the fact that I could barely remember anything about it didn’t bode well for this attempt.

Murnau does atmosphere so well, and in some ways the structure of the film is an interesting surprise - it’s resolution seems more postponed than a regular melodrama’s would be. But the whore/Madonna dichotomy represented by the two women just feels too simple for a film from this period. Furthermore I found the husband wholly unlikable. Sure he feels guilt at the outset, but what lead to this affair anyway? And why should his wife trust him after what he almost did? The city woman ain’t a rose either but he was so violent towards her and that was scary. Gaynor is pretty good but overall the performances were a bit broad.