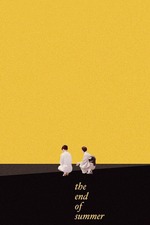 One of the three postwar films Yasujirô Ozu made at a studio other than Shochiku, The End of Summer does contain a few unique elements.

First and foremost, there's the casting: while there are a few Ozu regulars in the movie, it also features Toho mainstays such as Michiyo Aratama, Keiju Kobayashi, and the irrepressible Reiko Dan, who is perfectly believable as someone who would go out on a date, with a gaijin no less, while her (possible) father is lying dead on the floor (this film generally offers a great blend of comedy and pathos). One could also add Yôko Tsukasa to the list, who appeared earlier in Ozu's Late Autumn, one of her rare forays outside the studio. (Speaking of that film, the marriage-related conversations shared by Tsukasa and Setsuko Hara, sisters-in-law and not sisters as identified by most, often resemble the same from Late Autumn, where they played mother and daughter. The lakeside scene between the two, in which their posture and body movements emphasize their solidarity, is one of the most visually sublime Ozu ever shot.)

Then there's the score: Toshirô Mayuzumi, the great avant-garde composer who often included western elements in his music, as proven by his scores for Mizoguchi's Street of Shame and Naruse's When a Woman Ascends the Stairs, offers one that may be more pronounced than what most viewers are used to from Ozu films, but it is situationally appropriate, which isn't always the case in Ozu. (I believe his only other collaboration with Ozu was the 1959 Good Morning.)

And last but not least, the setting: Ozu's favorite city, Tokyo, is nowhere to be found here. Instead, we are shuttled between the modern metropolis of Osaka and old Kyoto and its suburbs, where most of the action takes place. The clash of tradition and modernity is one of the themes of the film: it is eventually learned that the family-owned sake brewery will need to merge with a bigger company in order to survive.

Ozu's penultimate film, The End of Summer may take a slightly different approach in its portrayal of the passage of time and the cycle of life, but it is ultimately just as poetic and melancholic as his best work.