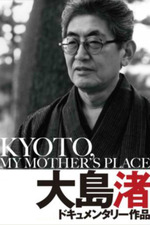 As much a portrait of his mother—who, as it is eventually revealed, was not a Kyoto native—as it is a document of the former imperial capital's sociocultural and historical ethos, this intimate and poignant work by Nagisa Ôshima also traces the roots of his own conflicting views about the place which had a formative influence on his life and art.

Judiciously employing old photographs, classical paintings, kabuki art, interviews with his maternal uncle and his mother's Kyoto-born highschool friends, and contemporary footage of the city still brimming with temples and festivals, Ôshima simultaneously outlines Kyoto's oppressive patriarchal traditions and the plight of his quietly determined mother who more or less raised him on her own after moving back to the city due to the untimely death of his father, who belonged to a samurai family.

Ôshima is well familiar with his privileged background and how it has influenced him both positively and negatively. To his credit, he is also self-critical of the way he himself took advantage of his mother, initially while in school and later when his career began in earnest and him and his wife were not able to look after their kids. Though he does not mention this, even his wife, Akiko Koyama, were sacrificing for him—during the making of Boy she did sketchy kimono ads just so they would have enough to be able to shoot the next day. The Ôshima who emerged in subsequent years as a genuinely thoughtful and caring talk-show host had clearly been affected by such experiences.

Commissioned for British television, this is a rarity among Ôshima's reportedly formidable documentary work to screen frequently at retros and applicable film festivals. Along with the equally remarkable 100 Years of Japanese Cinema, it has been rightly selected by the esteemed critic Tony Rayns as a 'buried treasure' in Ôshima's oeuvre.