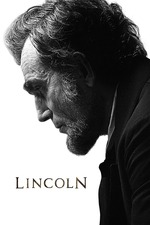 I consider Steven Spielberg to be one of the best filmmakers of all time, but not the absolute greatest. According to a lot of people, Spielberg's best films are Schindler's List, Indiana Jones 1 & 3, Saving Private Ryan, Jurassic Park, Jaws, Catch Me If You Can, and E.T. The Extra Terrestrial. While all of these films range from good to amazing, I do not consider any of these to be Spielberg's best films. I actually think Lincoln is Spielberg's best film. While Lincoln was highly rated when it came out, it isn't as renowned or spoken about as much as Spielberg's other films, which is understandable. I believe Lincoln is an underrated masterpiece.

I am not going to spend too much time summarizing the plot of the film since I am going to mention important parts of the story when discussing the deeper meaning of the film. I have heard a lot of people describe Lincoln as "safe", "generic", "crowd-pleasing", and "another biopic film". I could not disagree more. I believe Lincoln is a really thought-provoking film that provides a lot of unique insight about how dysfunctional the US government really is.

"How can I hold that all men are created equal when here before me stands, stinking, the moral carcass of the gentleman from Ohio? Proof that some men are inferior, endowed by their maker with dim wits, impermeable to reason, with cold, pallid slime in their veins instead of hot, red blood! You are more reptile than man, George, so low and flat that the foot of man is incapable of crushing you!"

I do not think this film is a hopeful story that glories President Lincoln. Instead, I think this film was meant to be a bittersweet story about how much President Lincoln and Thaddeus Stevens had to compromise in order to abolish slavery. President Lincoln wanted to abolish slavery, but he needed to be careful because the border states in the Union allowed slaves. Thaddeus Stevens was a radical Republican who wanted all men to have equal rights and opportunities. Unfortunately, he had to compromise by saying "all men are created equal under the law" instead of saying "all men are created equal" in order to get the amendment passed. The amendment itself abolished slavery, but it did not stop/prevent voter suppression, segregation, mass incarceration, police brutality, unequal educational/economic opportunities, or white people from being racist, all problems which are existent the US today. After the amendment was passed and the Civil War ended, the US government did and does very little to eradicate all of these societal issues. President Lincoln accomplished a great thing. Abolishing slavery was a major step in the right direction, but it wasn't enough for African Americans to have equal rights and opportunities.

What is this film trying to communicate? As I said earlier, this film isn't trying to glorify President Lincoln or celebrate the passage of the 13th amendment. Instead, this film tries to show how incompetent our government really is. President Lincoln and Thaddeus Stevens had to compromise with racist people in Congress just to get to amendment passed, an amendment that did not even guarantee African Americans equal rights and opportunities. This film shows how fighting against injustice is a very slow process though the US government because a lot of politicians are corrupt and bigoted. The film is bittersweet because while a great thing was accomplished, it was at the cost of compromising with racist politicians in Congress and not ensuring that African Americans have equal rights and opportunities in the US.

Lincoln is an underrated work of art. It might not be Spielberg's most influential film, but I believe it is his most important. That's why I consider this film to be Spielberg's best. I think this film has a lot more to offer than people give it credit for.