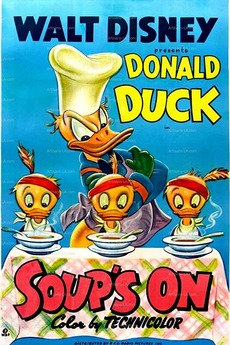 Donald's nephews come to lunch filthy from playing outside. Donald sends them to wash up; when he finds they've done a half-hearted job, he sends them to bed without supper. They scheme to get food; Donald catches them, but falls off a cliff while chasing them. He's OK, but temporarily out cold. The boys build a fake corpse and dress Donald up as an angel, and he buys it for a while.

Every film mentioned on Karina Longworth's Old Hollywood podcast "You Must Remember This." Listed in order of first episode it's…

All Disney Features and Shorts in Release Order - a challenge?

Everything with a Disney name attached to it in release order from their inception through to the present day. Includes…