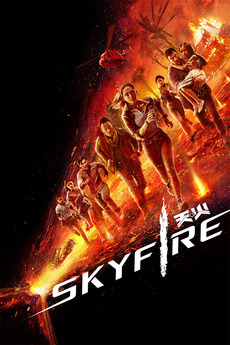 The mountain is waking up

Tianhuo Island is a beautiful paradise. It almost makes people forget that it is located in the "Ring of Fire", the world-famous Pacific Rim volcanic belt. Young geologist Li Xiaomeng brings her team here to develop the first volcanic monitoring system, the Suzaku. Li Xiaomeng's father, Li Wentao, a volcanic expert who has retired for many years, rushes to the crater after learning about it, trying to persuade her to leave. At the same time, expedition expert Zheng Nan dives in the beautiful underwater cave, preparing to give his girlfriend Jiahui a romantic proposal. The volcano erupts, and the fate of these people are entangled. In order to see tomorrow, they must work together to find a way to survive.

Movies centered around the spectacle of destruction caused by natural disasters like earthquakes, floods, tornadoes, volcanoes, asteroids and extreme climate…

A film is always improved by a helicopter explosion. And they blow up in films more frequently than you might…

Prison Daughters Tourism Board Japanified China Holding up half the…

The scheduled list, in chronological order, of films to be released in the U.S. during 2021.

Read the notes to…

All the films I saw in 2021 (for the first time). Based on german conditions, press screenings, (online-)festivals, screeninglinks and…

From the 21st Century

Listing as I think of them all the films released since the year 2000 I've seen. They'll make the list…

An always growing list of all the movies i've seen