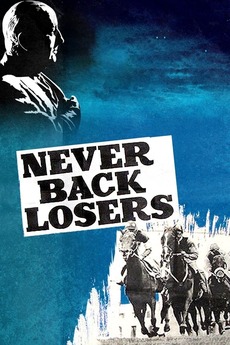 Two rival gangs are trying to fix horse races and a jockey is attacked and left for dead in a stage-managed car crash. An insurance investigator makes routine enquiries into the "accident" and one of the gang leaders feels threatened by this and takes counter measures.

A work in progress, with many films still to add. Corrections are always welcome, email is preferred: kevin@royalbooks.com.

I'm including the earlier, mostly British, Edgar Wallace adaptations which influenced the German Krimi films. Also included are the Bryan…

Awful films: Every Zero-Star Film Ever Reviewed in Halliwell's Film Guides--Part I (ALL those in 'The Movies That Matter' and alphabetically in the last Film Guide in 2008, from A to 'The Evil That Men Do')

The British film critic Leslie Halliwell (1929-1989) was one of the most devoted to his craft, and was notorious as…

Hollywood Goes to the Races

Films in which the world of horse racing is either the subject or a key component of the plot.