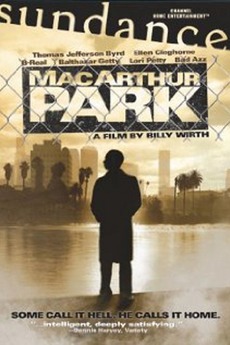 A portrait of a homeless park community bonded by crack cocaine addiction. In the park's drug-fixated shantytown, Cody is a kind of crackhead father figure who helps his friends when they are in trouble or in desperate need of a "blast." His girlfriend, Alicia, is a romantic who's losing her soul to the drug, and E-Max is a street hustling pimp who is trying to scoop young Linda into his motley legion of harlots. Hoover Blue, earth mother to all the addicts, attempts to pound some knowledge into the starry-eyed Linda while Cody tries to help young P-Air get his hustle on to record a hip hop track and make it big. But when Cody's real son, Terry, tracks him down to tell him his wife has passed away, Cody doesn't even recognize him at first and then can't help him with postmortem affairs. After five years of crack addiction, Cody wants to get straight and do right by Terry, but the harder he struggles to escape the park, the more it closes in on him.