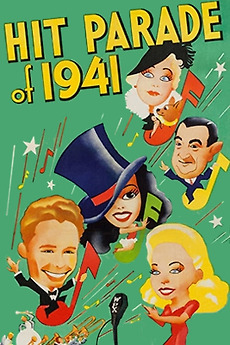 ROMANCE ... RHYTHM ... REVELRY. Combined to give you a musical extravaganza of matchless beauty and entertainment

In this musical, the second entry in a five-film series, a thrift shop owner sells his business and buys a small time radio station. He begins looking for sponsors. He finds one with a department store owner who will only lend him the money if he will allow his daughter, an aspiring tap-dancer and singer, to perform on the air. This is unfortunate as she is tone-deaf. To compensate, the owner hires a real singer to dub the daughter's voice. The singer and the owner's nephew fall in love and mayhem ensues. Songs include: the Oscar nominated "Who Am I?," "Swing Low Sweet Rhythm," "In The Cool of the Evening," "Make Yourself at Home," "The Swap Shop Song," "The Trading Post," "Sally," "Ramona," "Sweet Sue," "Dinah," "Margie," and "Mary Lou."

*Update 12/23: Rarefilmm.com is relaunching today with new selections. Please check out the site and enjoy watching these fantastic gems…

Rarefilmm: The Cave of Forgotten Films

All the films listed on Rarefilmm.com

📇My Prerogative: A List of Films That I've Personally (and Lovingly) Added to TMDb/Letterboxd

By year: Feature films produced in 1940

All the movies mentioned in the book of the same name. (Year dates aren't shown for all films, so if…