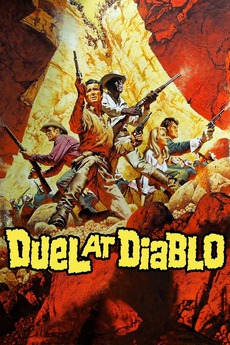 Yesterday they fought each other – today they fight together in a dead end canyon called Diablo!

While crossing the desert, a frontier scout, Jess Remsberg, rescues Ellen Grange from a pursuing band of Apaches, and returns her to her husband, Willard Grange. He is contracted to act as a scout for an Army cavalry unit. Willard, Ellen, and her infant son are along for the ride, as is horse trader Toller, a veteran of the 10th Cavalry. The party is trapped in a canyon by Chata, an Apache chief and grandfather of Ellen's baby. Willard is captured and tortured. Jess sneaks away and brings reinforcements just in time to save the day. Jess learns that the man he has been hunting is none other than Willard Grange.