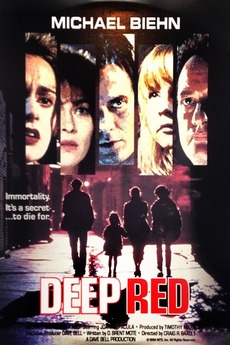 Immortality. It's a secret... to die for.

After a young girl is accidently infected with an alien substance known as "Deep Red", the astonishing results attract the attention of the illustrious scientist Dr. Newmeyer. Disillusioned security expert Joe Keyes must team up with his estranged wife to protect the girl and her mother from the obsessed scientist who will stop at nothing to get what he wants.

Every Movie I Own

My wife asked me to make this list. It'll take awhile but here goes.

Got inspired by Jao Monteiro's 80s horror list and wanted a similar one for the 90s. Tried to put sequels…

Films I Own But Haven't Seen Part Two

Apparently, the maximum amount of entries one can enter into a list on Letterboxd and have it…