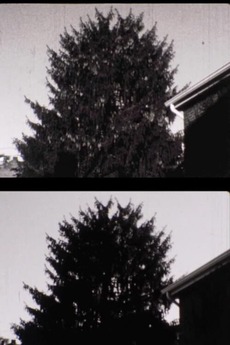 “The first house I bought was on 43rd Street in Pittsburgh. In this silent Super 8 triptych-projection, I documented the facade of each house on 43rd Street on 36 frames of film (center screen), while the oldest tree on the street﹘which was in my backyard﹘is shown in time-lapse over the course of several days (left and right screens). These films helped me locate myself along a continuum of time and space, relieving an anxiety of “ownership” with a sense of belonging.” (written by Tara Merenda Nelson)