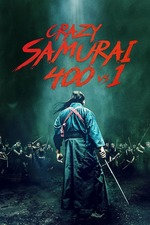 An essay on killing. Very good exercise on anti-mythmaking. It depicts the most famous battle of Miyamoto Musashi samurai career when he killed over 500 men in detail. It has a traditional prologue and epilogue, but the bulk of the film is one continuous 75 minute shot in which Musashi goes around butchering a nameless horde of enemies, but it is pretty much the opposite of silly showy stuff like tht big Extraction one take, as it isn't played for spectacle but for the drudgery of killing. Huge chunks of it involves Tak Sakaguchi standing around as people go after him. The cinematography is plain, the camera moments of fancy are not to play up the choireography but Musashi's exhaustion. It would be ridiculous to call this realistic at all (I mean it has lots of fake digital blood), but it is very deglamourized. One admires Musashi's stamina and survival instinct, but not his swordplay skills as one might expect. It is a conceptual action movie that can feel closer to austere art filmmaker doing a videogame (the game connections are obvious with many takes of Tak's back as he goes at extras, the increase decrease movements of the action, and a sound design that is pitched at screaming "MORE ENEMIES!" from time to time). The overall effect is numbing, an action movie of pure inaction in action, all about the senseless of its own achievment. The single take is less about spectacular filmmaking (because the filmaking ian't) but highlight the absurd waste of it all. Sion Sono developed the idea and give it to director Yuji Shimamura and I imagine he was very interested in the perversity of the bait and switch the movie plays with, one comes for something and receive the opposite. Is it self-defeating? For sure, and I can empathize with anyone looking for action thrills that got pissed at it. For extra perversity, the epilogue consists of a conventional shot action scene whose main function is contrasting with what comes before both aesthetically and thematicaly. It is a conceptual art piece desguised a bro movie and so one of the most curious film objects of 2020.