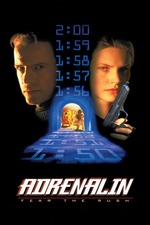 Pure tactile cinema. Half terrible, half amazing, so the full Pyun experience. A manhunt film reduced to the minimum, barely no character development, even less plots, just moving around a dark lit corridors. The lighting is incredible, not just let’s hide the no budget under dark, one gets In this kind of film, but a huge part of the experience. The little one gets of the plot just sets it up as part of the post communism Eastern Europe as pure undesirable dejection. The editing can be chaotic, as often it is the case with Pyun a marriage of necessity and offbeat instincts. This was hacked to pieces by the Weinsteins back in the 90s (who among other things moved the action to Boston for no reason), but Pyun put together a director’s cut that highlights its more experimental qualities. It is like Resident Evil with no budget or visual integrity but lots of unusual energy and inventive ideas.