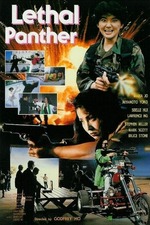 I think the first three scenes effectively demonstrate the weird tonal shifts of this film: the first scene takes place in the U.S., with a cop named Betty Lee (Sibelle Hu) beating up a guy buying counterfeit money in a slapstick street fight. We then cut to Japan and a completely batshit sex scene involving a condom filled with milk with little holes poked in it. After this tryst turns into a murder, we move to Hong Kong and a surprisingly stylish assassination sequence. Three countries, three storylines, and three completely different stylistic tones. The movie doesn’t seem like it knows what it wants to be: a light and fun Sibelle Hu Girls with Guns actioner, a rather explicit erotic thriller, or a dark portrait of a female assassin involving postwar trauma. Despite this odd mishmash, it ends up working a lot better than you’d think: there are some well-choreographed action sequences with quite good cinematography, and it ends up doing something quite interesting with the two female assassins who are sent to kill each other. It’s most memorable sequence takes place in a house owned by a prostitute where the two assassins take refuge and end up becoming friends. There is a strange but very welcome female solidary between the three women as they hang out. Sibelle Hu does pretty much vanish from the plot, though, as the film is more interested in exploring the perspectives and storylines of the two assassins. Despite the complex plot with lots of double crossings, the emotional turmoil of the assassins—particularly Eileen, played by Maria Jo—is what ends up carrying the film’s narrative.

A Ticket to Tomahawk

The Student of Prague