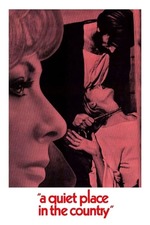 Elio Petri has one image, Modern Man like a trussed-up Rodin surrounded by whirring appliances and skewered by his babe, "un vero peccato." The frenzied mind laid bare belongs to the blocked Milanese artist (Franco Nero) futilely smearing his canvases with thick paint, his patron is his mistress (Vanessa Redgrave), also his nurse and killer in increasingly cacophonous visions. The Pop movement is the nonstop clickety-clack of the city, all the painter longs for is a little silence so he settles in the cottage near the woods. "Only death is quieter." Bergman's cracked aesthete in Hour of the Wolf is besieged by the beasts of Symbolism, in this version the clammy psyche is a Rauschenberg cutout-collage of crumbling frescoes, titillating magazines and gooey hues. D'Annunzio's haunted castle, where creaking doors multiply with a roar. The specter of the promiscuous Contessa (Gabriella Grimaldi) who both titillated and maddened fascismo, the buried past and the new muse. Fear of castration giving way to misogynistic venom, artistic inspiration shading into supernatural possession, a slew of conceits flashed by Petri like a stuttering slide show. "Crisis of humanity?" "Eh... crisis of shit!" A riotous horror style dilated from Bava for the protagonist's mania, an unmoored conscience stabbed by every chord of Morricone's most dissonant score. The butcher knife in the coruscating electric dishwasher, the cadaver in the garden, séances and dismemberment—all grist to Verhoeven's parodic mill (The Fourth Man). The punchline is the creative tranquility after the rupture, the realization that the crazy house is sometimes the best atelier.